Jasmine Kamante & Jesper Sundwall will be returning to New Zealand in March, 2015, and they will be having a two-person exhibition of new works at the lovely Railway Street Studios in August. The exhibition's opening is on July 31st, 2015.
They came to visit us in Florence last month; they were here to celebrate their wedding anniversary. Tanti auguri, Jasmine and Jesper!!!!!

Jesper in the studio. It was 6 degrees Celsius inside last week (in England)!

Jasmine starting her triptych.
Posted by Angel Academy of Art at 02:30 No comments:

Assoluta, oil on linen
Posted by Angel Academy of Art at 10:30 No comments:

Sister Vinci, an alumna of the Angel Academy, had one of her paintings given to Pope Francis as a gift from her congregation. The painting was presented to the pope by the General Superior Mother Paola of Sister Vincy’s congregation.

She is currently in Urbino, keeping busy with many works, among which is helping the old people in an old-age home run by her congregation of Suore Ospedaliere Della Misericordia (SOM).
Attached, too, is a photo of the maestro receiving a lovely kiss from Sister Vincy at her gaduation ceremony earlier this year.

Sr. Vincy with her final still-life project at the Angel Academy of Art.

Posted by Angel Academy of Art at 06:28 No comments:

Angel Academy alumna Christina Mastrangelo has been working on a large-scale triptych, and one of the panels won a place in the Portrait Society of America’s Members’ Only competition. Out of over 800 entries, the painting received 9th place out of 30 winners. The full triptych mock-up can be seen on Christina’s blog:  http://mastrangelo-art-blogger.tumblr.com/
Among other things on her blog, Christina has a marvelous How to Navigate your Early Career section.
The Oil Painters of America bestowed on Christina an honorable mention for her still life America’s Cup in their online showcase this summer. The Salmagundi Club is hosting their annual holiday Thumb Box juried show, and Christina has three pieces on display there for sale. Her painting From the Base of Mount Washington was honoured with the JoAnne Leiser Memorial Award this year.
She has just finished a remarkable painting, Behold, Your Heart, oil and gold leaf on linen over panel, inspired by Beatrice in Dante’s La Vita Nuova.
Congratulations, too, to Christina on her recent marriage!!!

Study piece for Know Not Thy Pending Fate
Posted by Angel Academy of Art at 03:30 No comments:

Our final year student, Alvin Mark Tan, is holding second his solo Art Exhibition in Singapore. Titled, Natural Realism (part one), Alvin is showcasing his work from the Angel Academy, which traces the process from his first Bargue copy to the 1st colour cast painting. His aim is to introduce and educate the public about Natural Realism.

Alvin spent this past summer urban-sketching the city of Florence and sold many of his ink and gouache sketches in a personal kick-starter. This was to raise money for his journey back to Singapore to hold the exhibition, which runs from Dec 17 to Dec 21. He is also launching his second sketchbook journal on Dec 19 called Ciao Firenze!, to raise funds for the rest of his final year at the Angel Academy.

We wish him all the best in the exhibition and book sales!

Minutes before the opening of the show

Visitors at the exhibition

Photos by Teoh Yi Chie.
To follow Alvin's art, go to:
http://alvinmarktan.blogspot.com
https://www.facebook.com/alvinmark.art
http://instagram.com/alvinmark
Posted by Angel Academy of Art at 13:00 No comments:

Cesar has been recently been teaching popular workshops in Brazil.

Posted by Angel Academy of Art at 16:30 No comments: 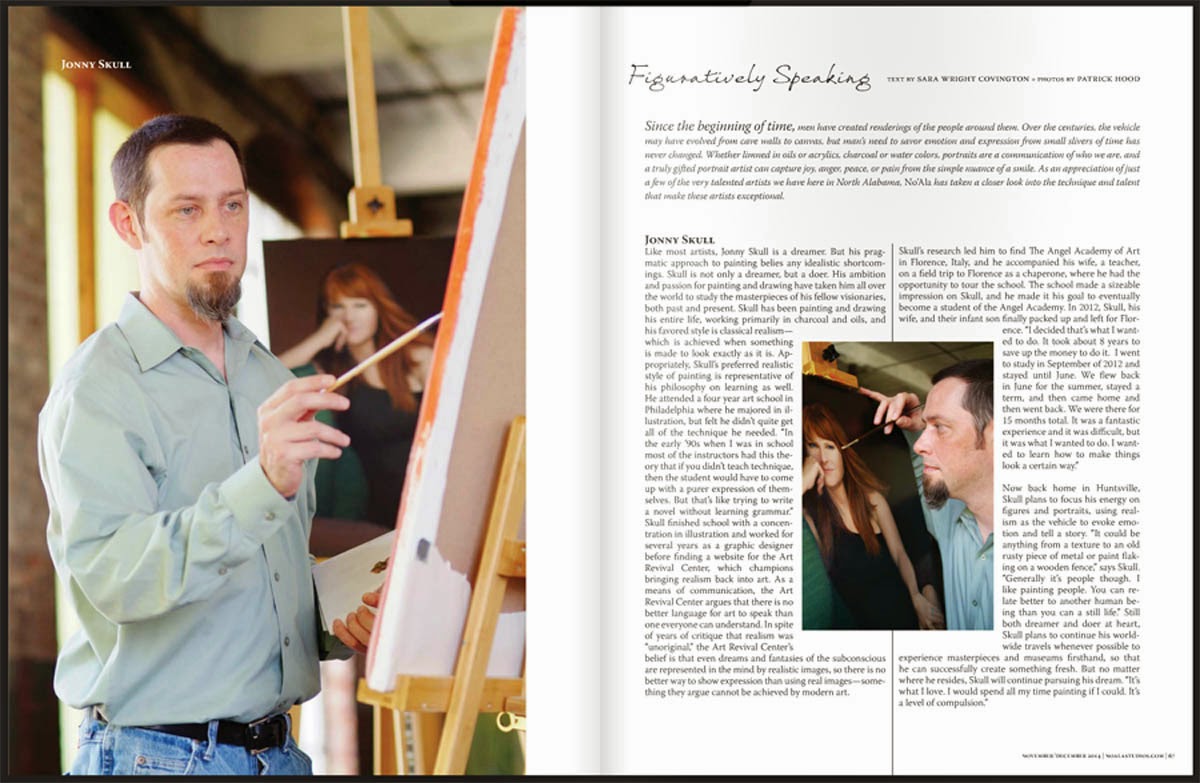 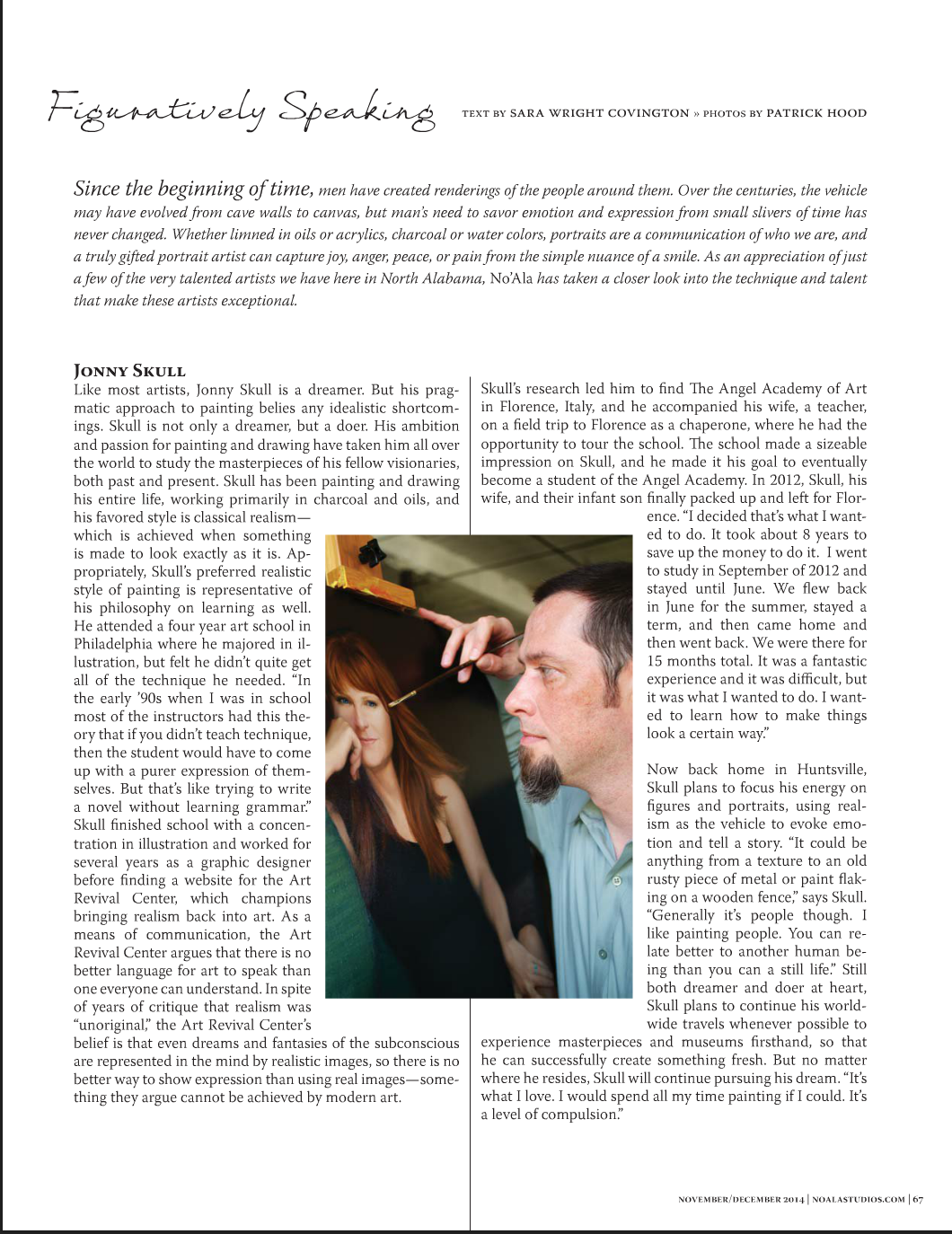 Posted by Angel Academy of Art at 14:00 No comments:

Victor Goikoetxea with his painting cycle

View of the installment of Seven Panoramas of Barcelona

Victor Goikoetxea in front of one of his paintings 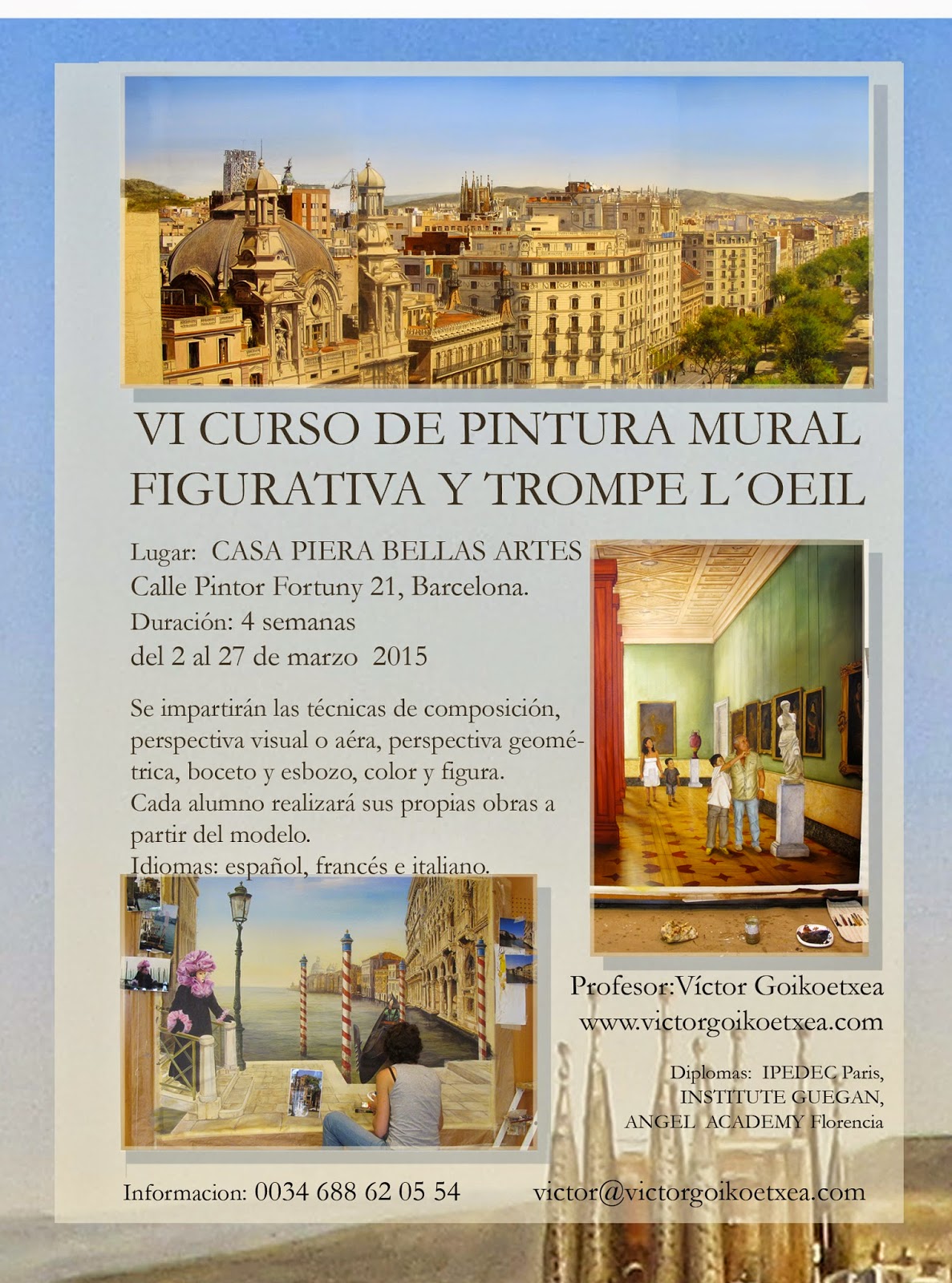 Posted by Angel Academy of Art at 15:30 No comments:

With great pleasure we announce that the Angel Academy of Art's:

is now available on our website: www.angelartschool.com
Come and enjoy the pleasure of studying in Florence during our Summer Workshop season in our state-of-the-art school.

Please do not hesitate to contact us for more information
Angel Academy of Art, Florence
email: info.angel@angelartschool.com

Posted by Angel Academy of Art at 17:30 No comments:

A talented artist's work charms the viewer. When at Ruukki, you should stop by the municipal building. In municipal buildings lobby are featured in October a young, very talented artist Henna's work. Pyhäjoki born Uoti has been interested in art since early childhood and has created many kind of art since primary school age. She studied first in Liminka Art School, where she continued to Italy, Angel Academy of Art in Florence. Studies still continue. Young 25-year-old artist's gifts speaks that her work has been published in the Digital Art Masters book. Digital Art Masters series describe the works of the world's best and most talented digital artists. Uoti's work has also been published in the Huffington Post article. She has had several smaller exhibitions in Finland. The works now in Ruukki have been done using different techniques. On Exhibit are works in carbon pencil, pencil, oil paints and watercolor. Uoti is also a digital technology expert, and there are some works in this media. In municipal buildings lobby are five watercolor works that are for sale. Other works won't be available for purchase.

Henna with her recently completed still-life

Posted by Angel Academy of Art at 16:00 No comments:

The Angel Academy's evening anatomy programme has begun for the 2014-2015 academic year.  It includes 15 hours of lectures, 70 hours of drawing from the live model, 18 home assignments as well as an occasional trip to La Specola natural-history museum where students can study from anatomical models.

Drawing from the live model

Posted by Angel Academy of Art at 21:00 No comments:

GOAL ACHIEVED!!!
Thank you everyone for your support!

News from the ARC:
Help! - Bring Skill Based Art to Public Schools!!

Greater amounts are of course welcome, but even a $1 donation will help the DVI Kickstarter come up with greater frequency within Kickstarter Searches. If even a small portion of our subscribers were to donate $1 we would easily fund this Kickstarter campaign. We need your help. The Da Vinci Initiative has started a major fundraising campaign through Kickstarter to bring skill-based training in the visual arts to public schools K-12. Teaching realist based art skills such as those implemented by Da Vinci and Michelangelo not only aligns with current educational research that other subjects currently embrace, but it also enhances the number of choices students can make when creating their own work. To view the Kickstarter project and video or to donate, click here. The Da Vinci Initiative is officially endorsed by the Washington Art Education Association.

To view the Kickstarter project and video or to donate, click here.

Fun fact: Both alumni Teresa Oaxaca and Nancy Hines are Da Vinci Initiative Ambassadors! More about what they are doing for the DVI coming up... stay tuned!
Posted by Angel Academy of Art at 09:30 No comments:

AAA alumna Teresa Oaxaca is showing in the S.R. Brennen Galleries in Santa Fe, New Mexico, along with Katherine Stone and David Gluck. Katherine and David both studied at M. John Angel’s school in Canada. All three of these artists are brilliant, and we highly recommend looking at the show’s on-line catalogue.
http://www.theuncannyexhibition.com/gallery-2

Teresa Oaxaca in her studio
www.teresaoaxaca.com

Posted by Angel Academy of Art at 04:00 No comments:

La signorina Nera Simi (1890 – 1987) was the daughter of Filadelfo Simi, one of the great 19th-century Italian Realist painters. La signorina took over her father’s studio in 1923 and developed it into the only school in the western world that taught and specialised in representational painting.

The Simi family originated in Stazzema, a mountainous area near the marble quarries of Cararra, and, this year, the town of Stazzema commemorated her achievement by naming a town square after her and creating a show of her alumni’s work. The show ran from July 12th to August 20th, 2014, and was a great success, with over 300 people at the opening and an average daily count of 20 visitors.

An outline biography of Nerina Simi can be seen here: http://www.filadelfosimi.it/biografia/nera_simi.htm

MJA in the new square dedicated to la signorina Simi.

Posted by Angel Academy of Art at 21:00 No comments:

Posted by Angel Academy of Art at 14:00 No comments:

In 2010, the city of Florence celebrated the centenary of Annigoni’s birth. The Angel Academy of Art, Florence, was asked to start the celebrations by mounting a show of students’ and instructors’ works in the Villa Bardini, which houses the Annigoni Museum. In addition, maestro M. John Angel was commissioned to paint a portrait of Annigoni, which now hangs in the Villa Peyron Museum, a museum that honours expatriates like Angel who have contributed to the ongoing traditions of Florence.

The Florentine drummers at the Angel Academy's 2010 Villa Bardini show

At Annigoni's grave in San Miniato del Monte for the 2010 Centenary of the maestro's birth. Left to right: Antonio Ciccone, Benedetto Annigoni, M. John Angel, Nelson White (standing to the right of the lady in white) and signora Rosella Annigoni (dressed in light green).

MJA and Benedetto Annigoni, during a 2012 visit to the academy.

Outside the show, in the Bardini grounds

Posted by Angel Academy of Art at 12:47 No comments: